In the age of interleague games, this is an old-school World Series ― a fresh matchup of teams from different leagues with little if any history between them before meeting with a championship on the line.

Over the 51 seasons of the Rangers franchise history that started as the expansion Washington Senators, there have been only three games played against the Cardinals.

“I don’t know much about it,” second baseman Ian Kinsler said. “Is there a rivalry?”

Michael Young, the longest-tenured Ranger in his 11th season, is the lone player left in Texas who took part in the only series between the teams. That was back in 2004, when St. Louis won twice in a three-game set at Rangers Ballpark.

“Let’s see, I think Carpenter pitched one of those games,” Young said, when asked what he remembered from that series. “That’s about it. That’s a long time ago.”
The Rangers will open their second consecutive World Series when they play a game in St. Louis for the first time. Game 1 is Wednesday night when C.J. Wilson is the scheduled Texas starter, likely against Carpenter.

After getting a day off following their six-game AL championship series over Detroit, the Rangers held a workout at home late Monday afternoon. They fly to Missouri on Tuesday, when most of the Texas players get their first glimpse of the new Busch Stadium.

Cruz, selected MVP of the ALCS after a postseason record six homers and 13 RBIs against the Tigers, was the Home Run Derby runner-up at Busch Stadium.

Wilson, the left-hander who replaced the departed Cliff Lee as the Rangers’ No. 1 starter and won 16 games this season, hasn’t won a game since Sept. 11. He was 0-1 his last three starts in the regular season, the last a two-inning tuneup before the playoffs in a game Texas won, and is 0-2 with an 8.04 ERA in his three postseason starts.

“I know what he’s capable of doing, so I don’t really care what’s happened in the past. Those starts for me are done,” Young said. “It has nothing to do with how he’s going to do his next outing, C.J. is a mentally tough guy, he’ll be ready for the outing.”

But since winning his playoff debut in Game 2 of the 2010 AL division series against Tampa Bay, free agent-to-be Wilson is 0-4 with a 6.42 ERA his last six postseason starts.

“He’s my No. 1 guy, my feelings haven’t changed,” Washington said. “We expect C.J. to step up and we really believe he will. ... What I expect to see out of C.J. is for him to go out there and keep the ball for seven, eight innings and have us to just turn it over to the bullpen late.”

Except that hasn’t happened for any of the Rangers starters this postseason.

Only two Texas starters have pitched even six innings in the playoffs, and the starting staff has a combined 5.62 ERA. In the ALCS, the Rangers became only the second team in a best-of-seven playoff series to have relievers get all four victories.

“Yeah, I’m a little surprised. I expect those guys to go deeper than they have,” Washington said. “But the bottom line is however deep they went, they kept us in the ballgame and we was able to pull some of them out. ... I think my hook has been right on time. If it happened to be in the third inning, so be it.”

Washington said the Rangers will use the same four starters in the World Series that they have these playoffs. But he only confirmed Wilson as the Game 1 starter and wouldn’t say in what order Colby Lewis, Derek Holland and Matt Harrison would pitch after that.

Since there is no designated hitter for Games 1 and 2 in St. Louis, and Games 6 and 7 if the series extends that long, several pitchers took some batting practice Monday. Among them were Wilson, Lewis and Holland, along with Alexi Ogando and Scott Feldman, both past starters who are relievers this postseason. Harrison, the likely No. 4 starter whose lone start would be in Texas, wasn’t scheduled to take BP.

Texas also had to start on the road in last year’s World Series, when the Rangers lost in five games against San Francisco.

This time, the Rangers have a better sense of what to expect when they try to win their first championship.

“Nothing is going to take us by surprise,” Young said. “We’ve got make sure out attention is completely what happens between the lines.” 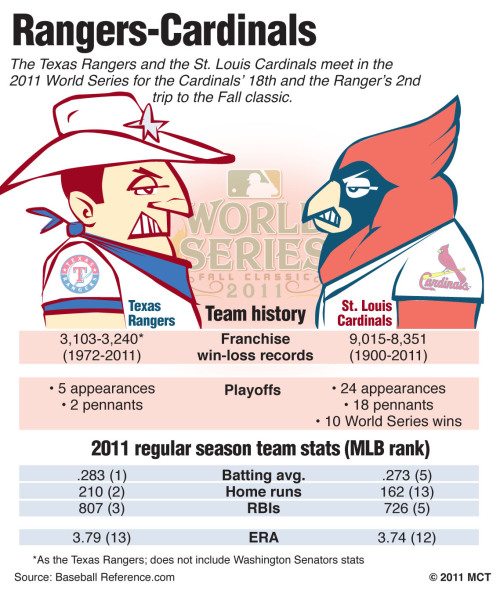