The SK Wyverns and Lotte Giants, which are tied 2-2 in the best-of-five playoff series, are set to play a final showdown Saturday at Busan’s Sajik Stadium.

If the Wyverns are going to reach the Korean Series for their fifth consecutive year, which will be the first time in the Korea Baseball Organization’s history, manager Lee Man-soo’s side requires one more victory to make it a reality.

“We’ll put our ace on the mound, and use all possible pitchers. We’ll play an all-out game,” Lee said. He noted that the Wyverns will bring out their ace Kim Kwang-hyun to start Saturday’s game.

The 23-year-old left-hander, who had a four-month hiatus due to injury, looked a bit rusty in the first game of the playoffs, allowing four runs on eight hits, including a home run, in 3 2-3 innings against the Giants.

But Lee believes Kim’s experience will prove to be the difference in the final game. Since his debut in 2007, Kim has helped the team advance to the Korean Series every year and win three league titles. 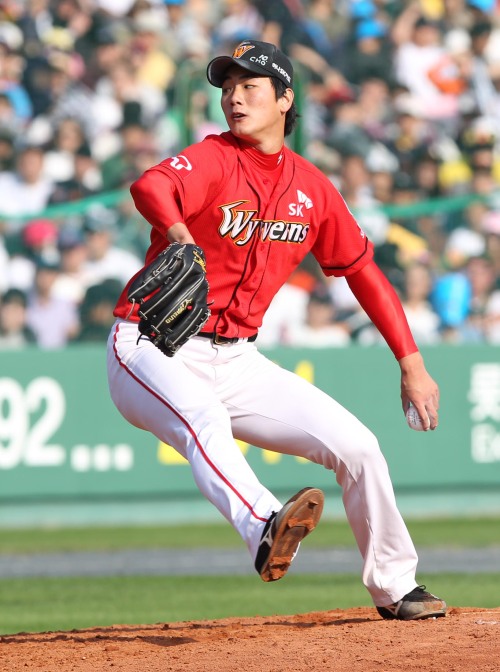 Meanwhile, the Lotte Giants, who aim to make it into the Korean Series for the first time in 12 years, will bring out their ace Song Seung-jun.

The 30-year-old veteran right-hander clinched a 13-10 win-loss record this season, and helped the team win the second tie against the Wyverns on Monday, allowing just one run on five hits in six innings.

The good news for the Giants is that their best hitter Lee Dae-ho now looks in good shape.

The 29-year-old slugger had a disappointing .167 batting average with just two hits in 12 at-bats in the last three games against the Wyverns.

But on Thursday in Game 4, Lee hit a solo home run in the sixth inning to shrug off worries over his recent form and help the team to a 2-0 win against the Wyverns at Incheon’s Munhak Stadium.

Thanks to the win, the Giants will now play the Wyverns one more time at their home Sajick stadium at 2 p.m. on Saturday.

The winner of the game will meet the 2011 regular season champions, the Samsung Lions, for the best-of-seven Korean Series, which kicks off on Oct. 24 at the Lions’ Daegu Stadium.