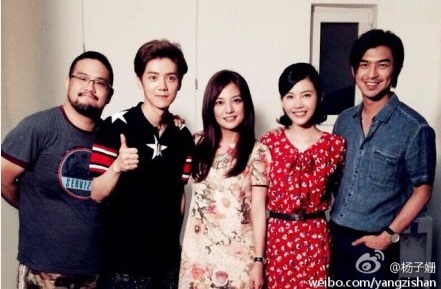 The K-pop sensation Luhan of EXO appeared in a picture with the Chinese actress Zhao Wei.

Famed Chinese actor Yang Zishan posted a photo taken with the cast of the Chinese film “Twenties Once Again,” on his Weibo account on Thursday.

In the photo, Luhan is posing for the camera with Zhao Wei, Yang Zishan, Chen Wilson and the film director.

Luhan is currently in China to participate in filming for the upcoming rom-com “Twenties Once Again,” the Chinese version of the Korean hit film “Miss Granny.”

The film is about a woman in her 70s who suddenly becomes a 20-year-old girl. Luhan is playing the grandson of the female lead.