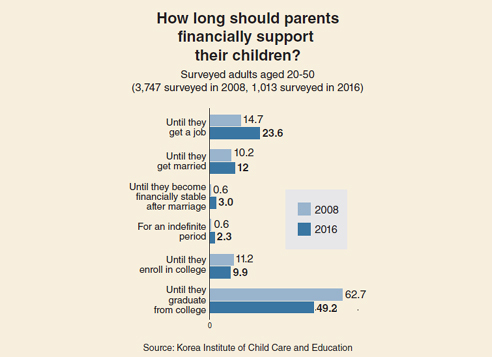 More South Koreans feel that as parents, they should financially support their children until they get a job, a survey by the Korea Institute of Child Care and Education showed Tuesday.

Eight years ago, more respondents believed they should support the children until they enter or graduate from college, while in the latest survey, more thought the support should be provided until the children become employed.

The researchers said they compared the responses from the same surveys conducted in 2008 and 2016.

They explained that children‘s financial dependency on their parents is likely to increase and prolong the number of adults living with their parents due to rises in unemployment and late marriages.