By Jo He-rim
Published : Mar 15, 2020 - 16:00       Updated : Mar 16, 2020 - 14:18
More individual brands have been turning to a direct-to-consumer strategy in South Korea, investing in their own online retail outlets and mobile applications to reduce dependence on giant middlemen, or e-commerce platforms.

As the preference for online shopping continues to grow -- particularly amid the coronavirus-enforced self-isolation recently -- competition among online retailers has been intensifying to the point that the line separating different industries is slowly blurring.

Industry insiders here expect e-commerce’s portion of overall retail sales to continue to grow in Korea, from the recent 24 percent to around 30 percent by 2021.

While marketplace platforms such as Coupang, Tmon and Gmarket have provided retailers and manufacturers alike the convenience and benefits of their vast pools of potential customers, more businesses are realizing that they are losing out in the spoon-fed distribution of platform giants.

In short, what they used to depend upon may now be seen as a hurdle to overcome. 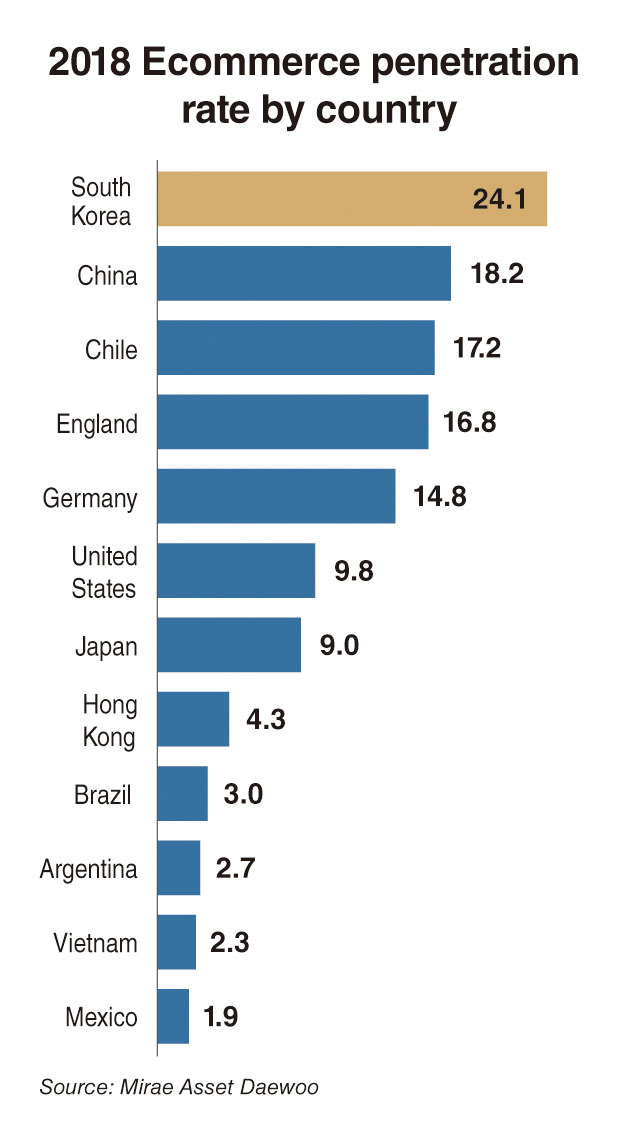 The trend toward the direct-to-customer strategy is growing around the world. International brands Nike, Birkenstock, Vans and Rolex even pulled out from global giant Amazon early on.

Shopify, the multinational e-commerce platform that provides services for businesses in selling products online, also pointed out last week that direct-to-consumer is “no longer a fad,” but “a steady state.”

Korean consumer brands and food companies are also moving to embrace their own digital platforms, with online retail outlets and apps to strengthen competitiveness.

Before the company only had an independent order and delivery app for Lotteria, but it now seeks to expand the service to its other restaurant brands to reach out directly to customers. The integrated application system would lessen the load for users in having to download separate apps for its franchises, the company said.

Bon IF that operates Bonjuk, a local porridge brand, and other Korean food franchises, also launched a new mobile app for delivery service in November. The company’s brands did not pull out from existing food delivery apps, such as Baemin and Yogiyo, but the company still seeks to directly reach out to customers via its own platform.

Bon IF has also renewed its online platform, Bonmall, where it sells the company’s home meal replacement products that are also distributed by other conventional retail stores and online platforms.

“It helps the company to reduce the cost going to the marketplace platforms such as commission fees, and it is also helpful in gathering customer-generated data,” a Bon IF official said.

None of the aforementioned brands abandoned the e-commerce platforms they had been using for such services as delivery and purchases. The e-commerce distributors and marketplace platforms still thrive and the manufacturers still make revenue from these platforms.

Biting the hand that feeds?

So why are manufacturers and businesses investing in platforms and not entrusting the distribution of their goods to the e-commerce experts?

While marketplace platforms appear to be the easiest route to reach out to customers, businesses often come to face great pressure to lower prices, as the competitiveness of their items comes mainly from pricing in the highly commodified e-commerce platforms.

But on a larger scale, manufacturers are now becoming more aware of the importance of raising and maintaining brand awareness -- and being in control.

In a sea of similar products and services, it is easy to lose one’s identity, industry sources say.

“In the US market, conglomerates and big companies, such as Nike and Apple that operate their own online shopping malls, are already leading the industry. DTC appears to have settled as a trend for the e-commerce industry,” Jung Yeon-sung, vice president of the Korea Distribution Association, told The Korea Herald.

“In South Korea, it is not as big as in the US, but the DTC trend should not be overlooked. In the long term, and in a wider sense, it can even be interpreted as a war between manufacturers and retailers.”

Dongwon F&B, Dongwon Group’s food division, has been running and expanding its own online retailer since 2007. While exhibiting continuous growth with its focus mainly on food products, the company has also launched the local industry’s first early-morning “dawn delivery” service Band Fresh.

As for Dongwon Mall, its appearance now resembles other e-commerce platforms, selling additional home appliances and general merchandise not limited to its own brand.

Cafe24, a Korean e-commerce platform that offers technology and services for the operation of 1.7 million direct-to-consumer operations, commented that the strategy allows for better control and aids in accumulating sales data and customer preferences.

As for companies that have many sales and marketing channels, having a main online retail outlet as the headquarters also helps brands sell more, Cafe24 said.